ISLAMABAD: Rafay Rashdi has talent and intellect running through his veins. Son of Mahtab Akbar Rashdi and hailing from a political background, it was nothing more than an absolute shocker to see Rafay’s debut flick tank at the box office.

Though his first cinematic endeavour was disappointing to say the least, it is pleasantly surprising to see the budding film-maker coming to terms with critical and commercial failure as well as moving onto bigger and better things – something not many brains behind the camera have comprehended.

Rashdi now heads one of the leading television production banners, Moomal Productions, churning out serials like O Rangreza, gearing up for a nationwide talent hunt and simultaneously working on the script of his next film – which he reveals is a complete departure from what he’s worked on so far.

In conversation with the Express Tribune, Rashdi opens up about his inspirations, the future of local cinema and what he has in store for us in the future.

ET: You are one of the very few film-makers who’ve publicly accepted failure, and one must respect that. After Thora Jee Le, how did you manage to secure a position at Moomal Productions?

Rafay Rashdi (RR): Winning and losing is a part of the field, especially when someone is passionate about their dreams. Coming across failure is what we call experience and experience is gained when we ‘make mistakes’ which helps improve one’s skills.

I think I’m still on step one and have a long way to go. Accepting criticism on Thora Jee Le was the best learning curve for a first time feature film-maker. I accepted the feedback with a positive approach, and decided to personally meet all the critics to understand what exactly went wrong.

The film industry is in its revival stage, and it is imperative to provide the audience with an entertaining film. The medium of film must leave the viewers with paisa vasool entertainment as well as an important message. 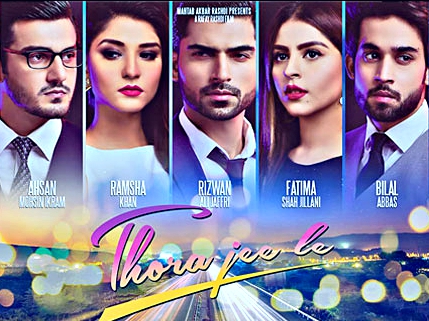 Thora Jee Le might not have been one hundred percent entertaining, but it did have social messages for the youth involved in drug addiction, progression of women in society, dealing with abusive marriage, stereotyping gender roles, frustration of struggling youngsters, and conflict of friends in practical life. These are some of the problems the youth are experiencing right now, and these were the messages I wanted to pass on through my film. The title of the film Thora Jee Le was actually the anti-thesis of what it portrayed.

Not many people got to know that. I should avoid getting too philosophical for my next venture. However, I’m quite happy the stars of my film have shined out, namely Bilal Abbas and Ramsha Khan and they’ve done quite well for themselves. I’m ecstatic to have given the industry new faces; a little bit of an achievement whenever Thora Jee Le comes up in discussions.

Post the film’s release, I decided to take time off. I shut everything down and disconnected myself from everyone for over two months to write my next film. It was then that the Moomal Productions opportunity came across.

I got a call asking for an individual required to manage productions and I had referred someone else. But then, thought about myself – to offer my services with production experience. One thing led to another, and I came on-board. It’s a big responsibility and I plan on giving my best. So far it’s been a superb experience meeting writers, directors, actors, music producers, and acquiring more technical experience.

I have some amazing ideas which I plan on executing this year, through this very platform. Wish me luck!

ET: You announced your second film earlier this year; when is that scheduled to go on floors?

RR: If it were up to me, I would’ve done it immediately, but post Thora Jee Le I decided to wait for some time. Audiences were not accepting any film which came out in the earlier half of this year, and they were all different genres.

It was important for me to understand market requirements, content and time period for a feature film in an industry which is currently reinvigorating. I plan on announcing it officially towards the end of the year, and pre-production is scheduled to commence early next year.

ET: Your next cinematic endeavor is a mystery-thriller; do you think the Pakistani audience has opened to genres of such sort?

RR: During Thora Jee Le promotions, I often mentioned that a league of film-makers would emerge, and they would cater to all sorts of genres. There will be comedy, there will be action, there will be rom-coms, there will be horror and hard hitting drama films. All of these can be incorporated in a single film as well, if executed properly of course.

I don’t think anything has been established as yet. Cinemas are still opening up, film-makers are still securing distributors, producers are securing investors, film-writers are coming forward, directors are emerging and to top it all off, we are unable to release a standalone film other than on festive holidays.

It’s still a learning curve. Some film-makers have done well after their second and third film, and the current war is on securing who gets more shows in theatres. It’s a work in progress.

For the past decade, our fresh batch of cinema goers has only witnessed Bollywood films, so their expectations fall there. We, as a film industry, have yet to develop original Pakistani content which was at its prime back in the day. Our genres are under construction.

If we are to make a stark comparison, let’s consider Aamir Khan Films; all diverse genres. If executed right, with social messages, it might just work out.

ET: Your next film also promises a pertinent social message, how important do you think social commentary is, and do you feel it’s being overdone?

RR: Looking at our television content, we’ve had some great hits. Our content is immensely appreciated internationally and social commentary does the magic. The messages communicated through the medium of television reaches out to everyone and are discussed at various social circles.

I personally don’t think it’s over-done. I think it has only begun, especially for our film industry. The medium of film is very powerful, and if you consider Shoaib Mansoor Sahab’s Khuda Kay Liyay and Bol, they were socially relevant films, which left quite a mark on every viewer and were massively appreciated to the core.

‘Thora Jee Lay’ is a film for the youth: Rafay Rashidi

I don’t even know why the discussion of a new film today begins with finalising which actress would look hot in an explicit item number? We can do better. How about we focus on creating original content?

Last year’s Oscar winning feature film Spotlight dealt with sexual child abuse; I’m not saying every film should be sad and depressing and commercial content should exist especially for our reviving industry, but it should leave the audience with a message, if done right.

I still can’t forget David Fincher’s Se7en which focused on seven deadly sins and a serial killer, a brilliant concept with just so much that one can take back. The very recent, horror SAW franchise and Aamir Khan’s Talaash for that matter of fact, had a supernatural feel, and a twist as good as any M Night Shyamalan film. All these films are just a small bit of what I have conceived for my next.

ET: Who do you plan on casting for the film? Though we know you’re a flag-bearer of young talent, do you feel you need established actors this time around to carry the film?

RR: I will have young talent in my film. I want to take initiative in opening doors of opportunities for new talent. With the film industry growing, our television superstars have moved on to films, and there is a vacuum. Similarly, fresh faces are also required on the big screen.

However, the burden of film cannot be carried by debutants only. Currently, our cinema-goers are not sold; maybe in the next five to ten years. So yes, I will have established actors as well.

Ideally, it would be great to have Fawad Khan as the protagonist [nothing is confirmed yet though], and as for the leading lady, I’m still thinking about it. All of it will be revealed in due time.