KARACHI: Rights activists in Karachi have decided to surrender themselves to police over the issue of Shia missing persons and start a “Jail Bharo Tehreek” {Fill the Jails Movement) from October 6.

The decision was made after Shia activists staged a protest on Ashura at MA Jinnah Road against state authorities, which have so far failed to produce around 30 Shia mourners allegedly picked up earlier this year by law enforcers in civvies a few days after they returned from Karbala.

Pasban-e-Aza Karachi chief Rashid Rizvi said the movement was being launched by the community and it needed support from every humanist living in Pakistan. “No single organisation is behind the movement but all Shias, other citizens and human rights activists should join us to become one voice against the disappearances of our innocent young men,” said Rizvi, adding that Shia mourners had been holding protests in front of different Imam Baras since Muharram 1 after Majalis-e-Aza. 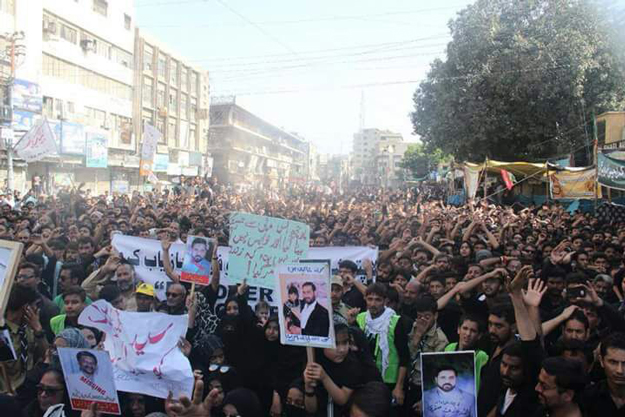 Shias protesting for the safe recovery of missing men during Ashura procession in Karachi.

Rizvi added that around 18 men were missing from Karachi alone whereas the total count of disappearances across the country have reached up to 136 Shia persons.

The representative also said that his community would start organising protests in several other countries to spread the word and denounce the LEAs’ highhandedness. “I appeal to my brethren that they stage protests wherever they are, be it Karbala, Munich, London, Melbourne, Mashad or anywhere they can.”

A prominent Shia cleric Allama Hasan Zafar Naqvi said during his speech on October 1 that he would begin the movement by asking police to arrest him as the state institutions had illegally kept the missing young men in their custody for almost a year now. 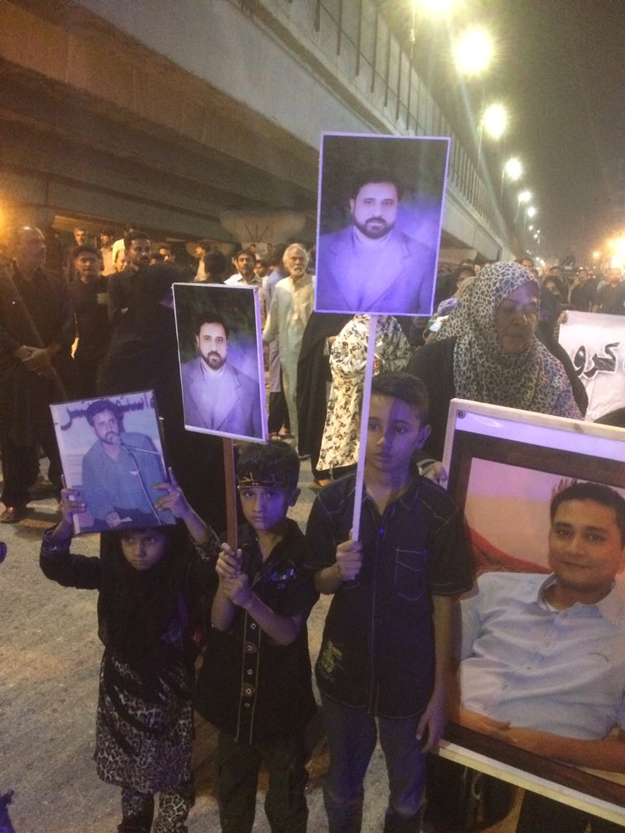 Children holding photos of their missing father who was allegedly picked up by law enforcers.

“We don’t want to disrupt peace and stability in our country. We are demanding our right. If the young men have done anything wrong, they should be given the right to a fair and free trial,” he told a charged crowd of Shias.

Talking to The Express Tribune, veteran human rights and socialist activist Dr Riaz Ahmed said, “The enforced disappearance of Shias is a genuine issue which we as citizens should look into. On one hand, the state institutions give protection to religious outfits who massacre Shia mourners on their way to pilgrimage. On the other hand, the authorities themselves pick up Shias on their return to Pakistan from holy places.”

He added that human rights groups in Karachi were scared to speak up as they feared that they might be picked up too if they dared to take the the issue.

Dr Riaz himself was picked up by Rangers in April allegedly for protesting against the illegal detention of political activists.

Protesters march from Hyderabad to Karachi against enforced disappearances

The activist, who is also a senior member of Karachi University Teachers Society (KUTS), said every citizen should participate in this protest against disappearance of Shias and he would personally be “standing shoulder-to-shoulder with the victims’ families”. 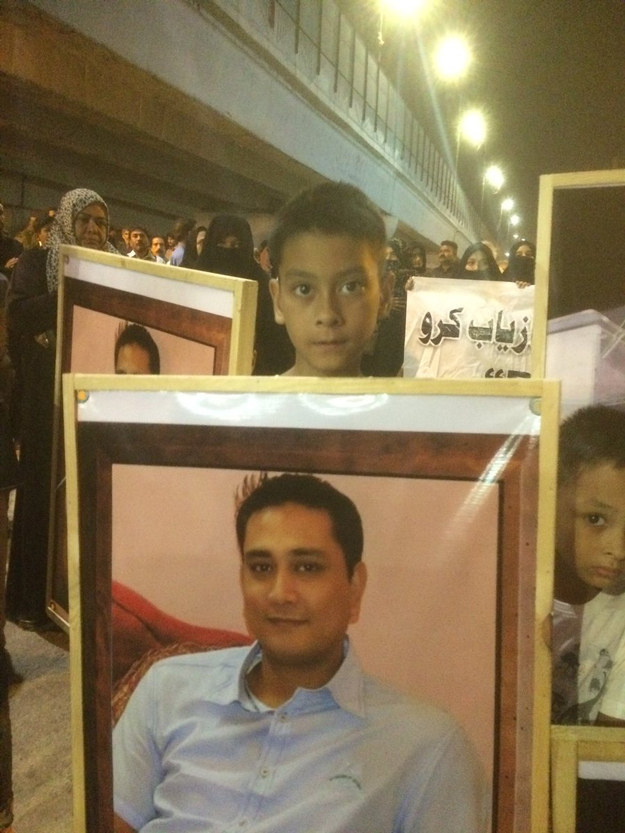 A kid is holding a photo of his father, who went missing during a protest at Aisha Manzil, Karachi.

Human Rights Commission of Pakistan (HRCP) Sindh Chapter head Asad Butt said they had also held a press conference demanding the safe recovery of the missing men after which only two of them were released that too without presenting them to court first or filing the case against them.

“We stand with the Shia mourners in this tragic time and will be joining their movement on October 6,” Butt said.

The human rights activist and expert further said the Shia men were picked up near the Karachi’s Rizvia Society just days after they were back from pilgrimage in Karbala.

One of the men who have gone missing is Samar Abbas who was abducted on January 7 from Islamabad, according to his family.

“The only crime Samar committed was speaking against the religious extremists who are still based in the capital city and declare members of other sects infidels,” his brother Ghazanfar Abbas told The Express Tribune.

“We have pursued every platform and took the matter to High Court and intelligence agencies but everywhere we were affronted. Now we have no other option but to beg police to arrest me as well with my family, aged father and children to protest against the atrocity we have been suffering for months now,” he said.

The ‘Fill the Jails Movement’ will begin from October 6 after Friday prayers outside Karachi’s Kharadar Bara Imam Bara, the activists said. 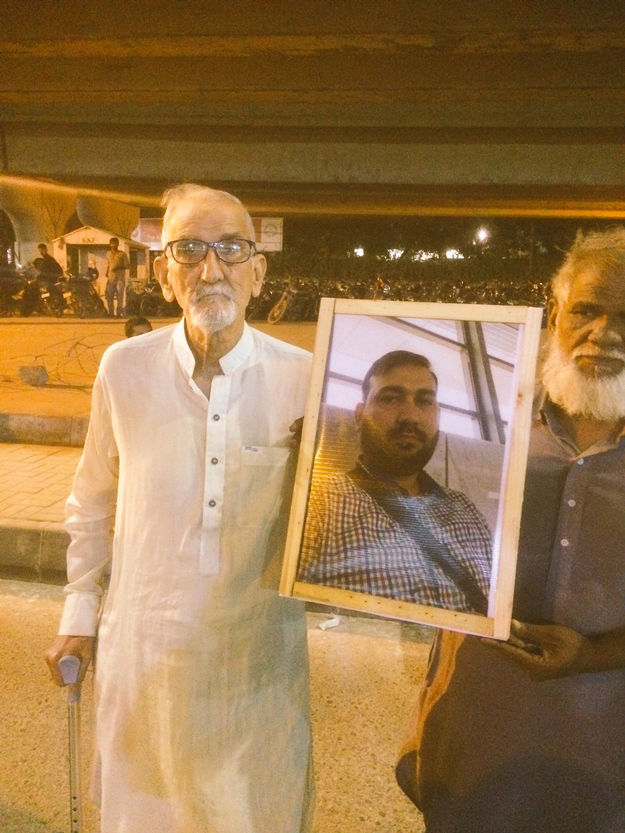 Father of Samar Abbas, who went missing in January this year, protesting for his son’s safe recovery.

The post Karachi’s activists to start ‘Fill the Jails Movement’ in protest over Shia missing persons appeared first on The Express Tribune.